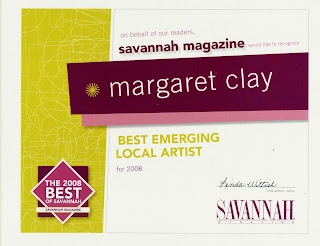 HEARTFELT THANKS to Savannah Magazine and Joe Driggers for your support!!


As Creativity Coach, Academic Coach, published author and artist, Margaret’s passion is to encourage and inspire others to inhabit the fullness of their own lives with joy and deep satisfaction.

Margaret's formal education includes a Bachelors in Child Development from the University of Georgia, Masters in Curriculum and Instruction (emphasis in Reading) from the University of Colorado, and professional coaching certificate from SUN (Success Unlimited Network). Writing and painting have happened more organically.

Margaret has been writing for a lifetime. In 1999 some of her writings became known as “Monkeyminders: Loving Thoughts to Still the Monkey in Your Mind”. Messages printed on little cards, Monkeyminders have found their way into the hands and hearts of friends and strangers, often very serendipitously.

In the fall of 2007, Margaret started what she now calls ‘Intuitive Painting.” Many of these paintings have words in them and most of them have Monkeyminder messages associated with them.

Since then, her images and words have also been sold as prints, greeting cards, bookmarks, journals, t-shirts, silk scarves, and most recently, two books.

In the summer of 2008 Margaret was voted Savannah Magazine’s “2008 Best Emerging Local Artist”.

In December 2008 a friend asked Margaret to paint a pink ribbon painting to honor a Breast Cancer survivor. The result was named “With Love” and was later on the cover of a local magazine,The Skinnie. In support of Breast Cancer Awareness in 2009, With Love t-shirts were sold in local stores with a portion of the proceeds donated to provide screening for women in Georgia.

In May of 2010, Margaret began hand painting silk scarves. Her work, often described as full of color, energy, and inspiration, has jumped to a new level of brightness and energy through these scarves. One of her early projects was a Water Series, focusing on the sea life most affected by the recent Gulf tragedy. Margaret believes that the more positive energy we can surround ourselves with in every way possible, the more we can positively affect our world. Margaret sees her simplistic artwork to be the carrier for the loving messages that accompany them.

In December of 2010, 4 of Margaret’s scarf designs were made into reproductions on satin silk. The end product is larger and heavier weighted silk which adds more vibrancy and luster to the scarves.

This year, 2011, has been the year for publishing. It is Time, originally published in 2010 in spiral bound, is now a beautiful, full-color hardback edition. The Book of Monkeyminders is new this fall and is also available on http://www.amazon.com/. Many of her current works for sale can be found in her Etsy on-line store. 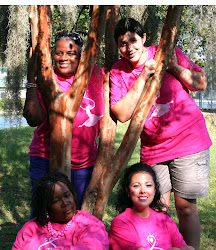 HOT OFF THE PRESS! 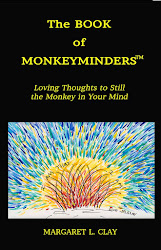 Click on images and scroll down to see more. 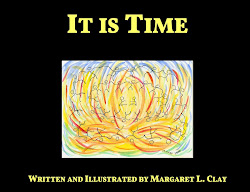